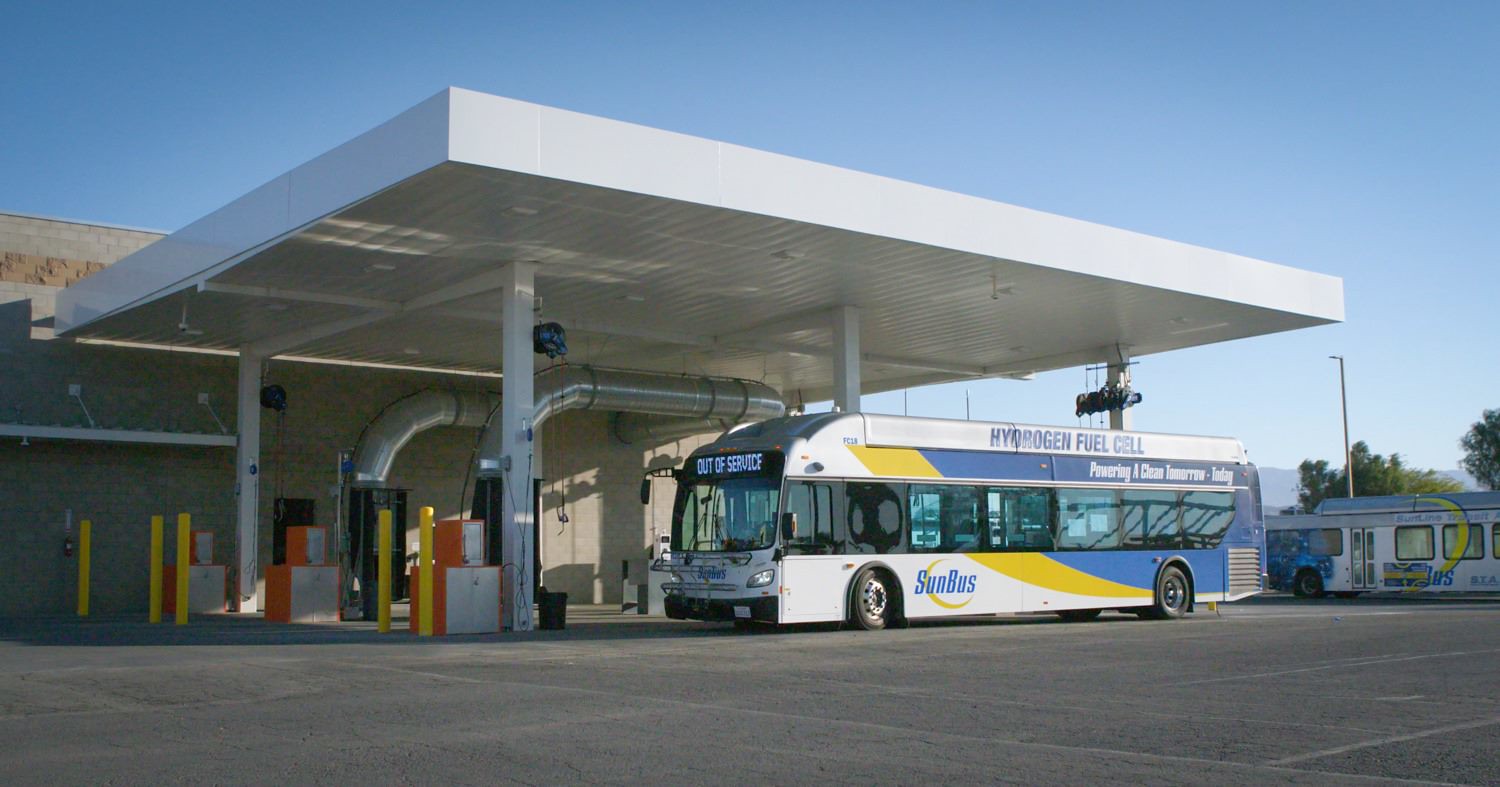 Southern California Gas Co. (SoCalGas) announced that it will demonstrate a groundbreaking technological combination that will produce hydrogen from renewable natural gas (RNG) at SunLine Transit Agency’s hydrogen fueling station in Thousand Palms, California. The research project, called “H2 SilverSTARS,” will produce renewable hydrogen to fuel SunLine’s fleet of 17 hydrogen fuel cell electric buses and support further expansion. The combination of new technologies will make it possible to provide renewable hydrogen made from RNG at natural gas fueling stations—or any location near a natural gas pipeline. The goal is to produce emissions-free renewable hydrogen for fuel cell electric cars and other vehicles at a price competitive with gasoline. Photos and video of the SunLine buses and a diagram of the STARS technology are available here.

Hydrogen-powered fuel cell electric vehicles are expected to play an important role in meeting California Governor Newsom’s executive order requiring all new cars sold in the state be zero-emissions by 2035. As demand for these cars increases, Californians will need thousands more stations where they can fuel up with hydrogen.

The demonstration project will integrate two core technologies. The first, Linde’s HydroPrime HC300 MIN system, will make hydrogen from renewable natural gas the same way large centralized hydrogen production plants do—but with compact equipment small enough to fit in a tractor trailer container. While Linde’s system is already commercially available and being used abroad, its use at SunLine’s fueling station will be the first time it is deployed in North America. The SunLine location will be able to produce up to 650 kilograms of hydrogen a day.

The second technology, STARS-165 SMR, built by the start-up STARS corporation, takes the Linde system a step further. It achieves significantly greater efficiencies in producing hydrogen by using a compact microchannel design and is driven by an electricity-powered induction heating process, meaning there is no combustion, which significantly reduces greenhouse gas emissions compared to traditional hydrogen production. In addition, the system is produced using 3-D printing, making it well suited for mass-production and thus drastically less expensive to make and operate compared to alternatives. Two STARS systems, with a combined production capacity of up to 330 kilograms of hydrogen a day, will be installed for this research project.

The 36-month project will initially demonstrate both core technologies individually and collect performance data to assess the STARS system’s potential to improve its efficiency and cost.  The STARS SMR technology will then be integrated with the Linde HydroPrime system with the goal of fast-tracking its commercialization.

“These technologies could drastically change the face of hydrogen production in California, creating the opportunity for anyone to fill up their fuel cell electric car, truck or bus with low- or zero-carbon hydrogen anywhere there’s a natural gas pipeline,” said Neil Navin, SoCalGas vice president of clean energy innovations. “For SoCalGas, this is another step toward meeting our pledge to achieve net zero greenhouse gas emissions in our operations and delivery of energy by 2045.”

“Our agency has been a longtime advocate of advancing clean air and alternative fuel technology. This partnership with SoCalGas allows us to continue converting our fleet to zero-emissions five years ahead of state mandates,” said Lauren Skiver, SunLine Transit Agency’s CEO/General Manager and California Hydrogen Business Council chair. “It also helps us realize our goal of making hydrogen fueling accessible to the public in order to inspire a cleaner tomorrow.”