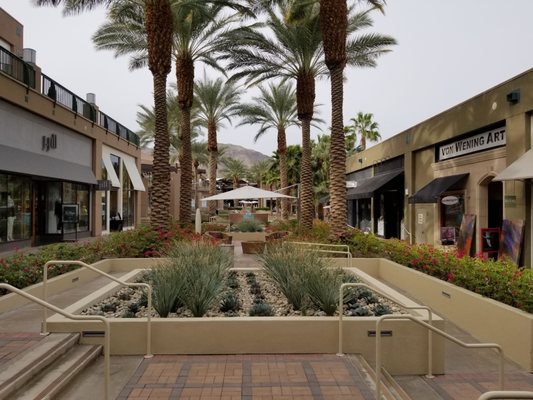 Taxable and retail sales data for the third quarter of 2020 for the nine Greater Palm Springs cities has recently been released by the California Department of Tax and Fee Administration (CDTFA). An analysis of the very important third (summer) quarter along with the first two quarters provides a look at an extremely important sector of our local economy in an unprecedented period of time.

Until 2018, management of this important data was under the purview of the California Board of Equalization. Under their administration, the release of the data was consistently at least 16 months after the end of each quarter, which diminished the benefits of analysis and relevance to current economic conditions. Now data is available much sooner than ever.

Taxable sales data includes all goods and services that are taxed in California, including use taxes. Retail sales includes only the tangible items such as cars, clothing, building materials, food/beverage (although some are not taxed) and general merchandise.

To put things into perspective, the volume of consumer spending in the retail sector comprises 70% of gross domestic product in the United States. That figure is likely even higher in Greater Palm Springs because the millions of visitors to the desert every year spend hundreds of millions of dollars in these categories of our local economy, so per capita spending is very high (because spending by visitors is counted but they are not counted as part of our population base).

As shown in the table below, retail sales for the Greater Palm Springs region dropped by 9.2% in the first quarter of 2020 and then plummeted by 28.1% in the second quarter. After adding in the 1.5% increase during the third quarter, the retail sector was down 12.6% after the first three quarters. 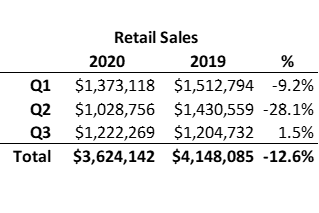 Similarly, total taxable sales were down 14.5% through the first three quarters of 2020 compared to 2019.

Like most sectors in our regional economy, such as hotels which were trending up, it’s likely that retail sales were strong and at least in line with 2019 for the months of January and February. But as awareness of the pandemic grew during February and the stay-at-home order and business closures hit on March 19, 2020, the precipitous fall began.

In terms of dollars, total taxable sales were down $752 million and retail sales were down $524 million from January 1 through September 30, 2020 compared to 2019. If not for the federal stimulus payments through the Coronavirus Aid, Relief and Economic Security (CARES) Act, approved in late March by Congress, things would definitely have been even worse in the second quarter months of April, May and June. Most of the $1,200 payments (for singles) and $2,400 (for married couples), along with $500 per child, were distributed by the middle of April. One can only imagine what would have been without that cash in the system along with the state unemployment insurance payments, including the $600 per week added to it for a few months during the second and third quarters.

As bad as these numbers are, by comparison, taxable sales were down roughly $750 million more during the same period of the worst year of the Great Recession in 2008. If we account for the difference of approximately 40,000 full-time residents here now spending the current per capita rate of $5,400 there is still a difference of roughly $500 million dollars. So, we made it through the depths of the Great Recession, which were much worse, and we’ll fight our way out of this difficult period too.

Third quarter comparisons are especially important because retail sales are not as significantly impacted by tourist spending as in the other quarters, so it serves as a good barometer for the buying power of the permanent population.

Again, in the third quarter of 2020, retail sales in the region were up 1.5% compared to 2019 with total sales of $1.22 billion. While it is positive to see an increase of any amount in any quarter, it is less than the impressive 10.2% increase in Riverside County as a whole. Unlike past years, prior to the start of the new millennium, when much larger dips in sales occurred in the summer, Greater Palm Springs has become more of a full-year economy. 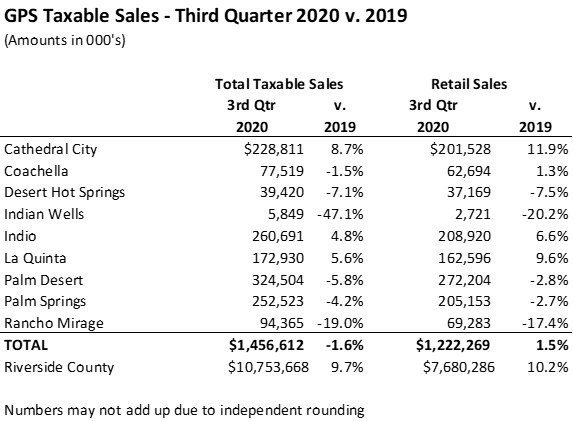 Looking around the region, retail sales highlights include:

It is likely that when the fourth quarter 2020 taxable/retail sales figures come out we’ll see another drop compared to 2019 as stay-at-home orders were re-enacted for locals and tourism, in terms of hotel closures, was severely impacted in November and December.

With all of the data and analysis above in mind, it is very interesting to consider how much of an impact the stimulus payments had on taxable/retail sales.

According to a recent comprehensive national survey by the New York Federal Reserve, in turns out that more than two-thirds of survey respondents used their stimulus checks for savings and debt repayment – not on consumption. The survey data shows that the funds were utilized as follows:

When the same respondents were asked how they planned to spend the second stimulus checks released in January, the data is even more striking:

The survey results suggest that Americans mostly planned to save their second stimulus checks which means they would not spend it to boost the economy as intended by Congress. This is an especially important topic right now because of the debate going on in Congress about the third round – whether it should be more focused on those clearly suffering hardships or more general because it looks like people with even fairly high income levels likely will be able to qualify for more government funds.

We will continue to gather taxable/retail sales data and report on it as soon as it becomes available. It will be interesting to see what the data reveals, especially in light of the survey noted above.